Strong spirit where the body couldn't get asylum

The cost of living high, don't cross the picket line and get the virus

Wild cat has got 'em in a bind, stay inside

Know I came from out the thicket smilin'

It doesn't matter to the ten of five

They start hackin' when they can't shrink us

I found the middle in a bit of balance

Fever in the cabin

I knew where we was headed

I ain't countin' no blessings, I sure as shit could measure

Blinkin' for some feasible methods to free yourself

Slick oil in a fish' gill

I fill a void with the pen, feel the fear, shrill

Couple stains that I couldn't shield

My brother, Brain, that we couldn't shield

And what remain of the wolves, nil

I held the page, gave the book ears

Whispered "Thanks", hella pain, heavy rain in the Catskills

Played the shade, quite a deal, glad we stayed friends 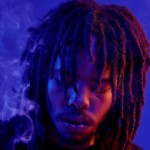